The Choptank River Lighthouse is a replica of a six-sided screw-pile lighthouse that guided mariners along the Choptank River for generations. The replica was completed in fall 2012. It's located on the end of Pier A at Long Wharf Park (Water and High Streets) in Cambridge, on Maryland's beautiful Eastern Shore. The lighthouse is normally open to the public for free, self-guided tours daily from 9 a.m. until 6 p.m., from May through October.

During the off-season months, visitors can see the lighthouse by appointment by sending an email to ChoptankLighthouse@gmail.com or calling 410-463-2653.

If you or someone in your party needs elevator access to avoid the steps up into the Lighthouse, please make arrangements before your visit by calling 410-228-4031 or sending an email to dockmaster@choosecambridge.com.

The lighthouse includes a small museum, with exhibits about the original lighthouse's history and the area's maritime heritage. It is located just a few blocks from historic downtown Cambridge, with award-winning restaurants, shops, galleries, and museums.
• Find out more about Downtown Cambridge.

History of the Choptank River Lighthouse

The Choptank River Lighthouse once stood between Castle Haven and Benoni Points on the Choptank River, near the mouth of the Tred Avon River. The lighthouse station was established in 1871 by the U.S. Lighthouse Service, a government agency that later became today's U.S. Coast Guard, the service which still manages America's navigational aids. 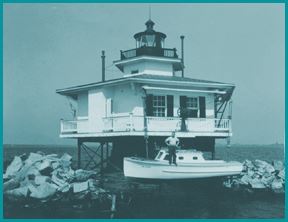 The original lighthouse at the Choptank River Station was built in 1871 at Baltimore's Lazaretto Lighthouse Depot, moved on a barge to the site and loaded onto the iron skeleton legs which were screwed into the substrate of the Choptank River. An ice floe in 1918 demolished this first structure. Instead of building a new structure, the Lighthouse Service elected to move the spare Cherrystone lighthouse, then in storage at Cape Charles, Virginia, to the Choptank River Station. The Cherrystone lighthouse was put in place in 1921 at the Choptank River site, making it the only lighthouse in the Chesapeake that has served two states. The structure, pictured here, stood at the station until 1964, when the house was removed under the Coast Guard's modernization program. Today at the site there's a small flashing light to guide boaters.

History of the Replica Lighthouse

The Choptank River lighthouse that stands today in the Cambridge marina is a replica of this last lighthouse, utilizing original plans made available by the National Archives. The hexagonal cottage-style house stands on pilings similar to its namesake screw-pile network of "legs" on a platform at the end of Pier A at the Cambridge City Marina. The footprint of the structure is 42 feet from one hex point to the other, and sits on a 60 feet by 60 feet platform with an overall height approximately 40 feet. The lighthouse is visible by water, greeting boating visitors to the marina. It can also be seen from the U.S. Route 50 Choptank River bridge and the nearby city.

The notion of building such a replica on the waterfront in Cambridge dates to the 1990s, when a civic improvement group called the "Committee of 100" introduced the concept as part of a broad-based plan to revitalize Cambridge. C. Robert Spedden was a key advocate for the concept in this period. The idea was two-fold: Not only would a replica lighthouse do honor to the community's rich maritime history, it would also drive economic progress by bringing visitors to Dorchester County and serving as a powerful visual icon of the community's revitalization.

The first civic group formed specifically to make this vision a reality was the Long Wharf Lighthouse Committee. That group laid a foundation of community support, but fell by the wayside as funding proved hard to come by. Picking up the baton in 2004 was the Choptank River Lighthouse Committee, led by Patrick Hornberger, George Wright, and Margaret Wolff. This group won a grant to conduct a feasibility study. Armed with the results of that research, the committee then got enabling legislation passed by the Maryland General Assembly in 2008 that would allow the construction of a screwpile lighthouse replica at the Cambridge City Marina.

Once more, however, fundraising proved a daunting obstacle. A third group picked up the baton in 2010. Led by Jackie Noller and supported by generous donations from Dorchester County residents Rufus and Lorraine Todd, the Choptank River Lighthouse Society succeeded in taking the project to the finish line. The replica lighthouse was dedicated in September of 2012.

The Lighthouse Society then evolved into a new nonprofit group, the Cambridge Lighthouse Foundation. That organization works today to maintain the Lighthouse, attract visitors, and enhance the experiences those visitors enjoy. In the spirit of the original Committee of 100 vision, the foundation also works to spur economic activity by connecting Lighthouse visitors with the shops, restaurants, hotels, and other attractions of Dorchester County. 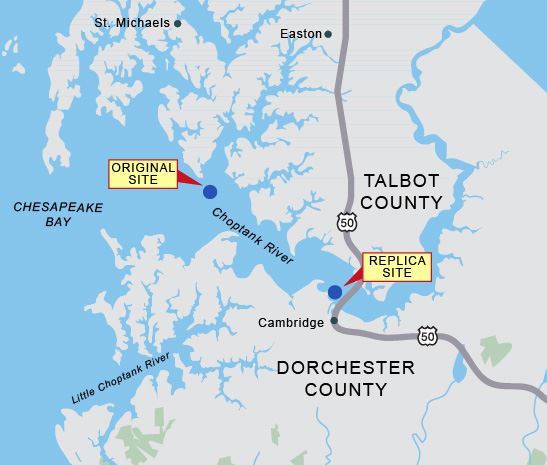